Feeling helpless at the immensity of the BP oil spill in the Gulf of Mexico, New Orleans resident Ro Mayer organized a protest in a typical New Orleans way: a mock jazz funeral for the Gulf and its wildlife. Participants in The Krewe of Dead Pelicans were asked to wear black pants and blue shirts, and to carry blue umbrellas painted with black splotches--symbolizing the black oil beneath the blue waters. They also were asked to wear shrimpers' boots--the short white rubber boots you'll see many people in the second-line parade wearing--symbolizing the mighty Louisiana seafood industry, which is likely to be permanently devastated by the oil spill.

Photo of oil-coated pelican by Matthew Hinton/The Times-Picayune
As Ro Mayer said in her video interview with the local newspaper's reporter, we feel helpless in the face of this calamity. We have to cope as best we can. At nearly five years after Katrina, we are faced once again with an environmental disaster that will destroy our marshes, our wildlife, our homes, our businesses, our jobs, our economy, our lives. Its effects will be felt for decades, if not centuries, and will reverberate far beyond Louisiana and the other Gulf Coast states.
See the video of the event, held Saturday, June 5, 2010. Hundreds of people participated.
In a press conference last week, BP CEO Tony Hayward said he'd like to have his life back. Yeah, so would we, but it ain't happening. How about this, Mr. BP? You don't get your life back until, and unless, we get our lives back. You suffer what we suffer, as long as we suffer. How about that? 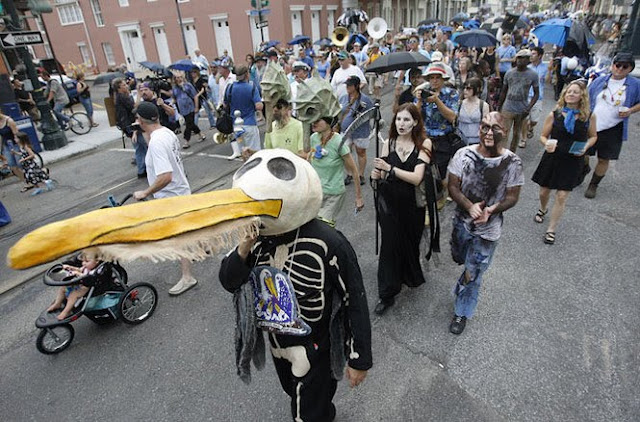 I saw Candy also posted about this. Very much a New Orleans kind of thing. You wouldn't see something like it elsewhere.

Protest brings attention to things that matter. Thanks for posting this.

Don't know if you saw it, but I recently posted about the spill, myself.