What I've Been Reading

It's curious how different books can be when you read them than what you expected from the back-cover blurb.

I recently discovered the work of Julia Spencer-Fleming, a really excellent mystery author. On recommendation of members of my writers' group, I read her first book, In the Bleak Midwinter. Had it not been praised by people whose judgment I trust, I would never have tried it--I would have shunned the book based on the back-cover blurb. The heroine is an Anglican priest--a woman priest--and I'd expect a book featuring a priest or minister to be preachy, to force-feed religious dogma to the reader. How wrong I was!

In the Bleak Midwinter (2002) is the only debut novel to have won six major mystery awards--according to the author's website, it "made debut history when it won the St.Martin's/Malice Domestic contest, the Dilys Award from the Independent Mystery Booksellers Association, and the Agatha, Anthony, Macavity, and Barry awards for Best First Novel." After reading it, I can say it deserved those awards.

No sooner had I finished the book than I purchased and read the second in the series, A Fountain Filled with Blood (2003), which was as good as the first book. I have the third in hand now, Out of the Deep I Cry (2004), and I'm eager to start on it. There are two more in the series after this, To Darkness and to Death (2005) and All Mortal Flesh (2006). All Mortal Flesh has been nominated for the Agatha award and also for Mystery Ink's Gumshoe award. It also made several "best of 2006" lists, including Publishers Weekly, Kirkus, and Library Journal.

I love to discover a good author who's already completed several books in a series, because I don't have to wait for each book. Of course, once I reach the latest book, I'm on the wait-a-year-for-the-next-one list. But at least while reading the backlist I can immerse myself in the bliss of wonderful writing. 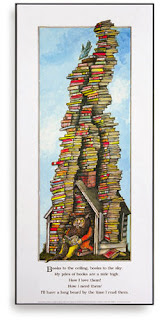 My blolleague Charles Gramlich had an entry in February on Biblioholism. This is a disease I share with him. I believe my case is more severe, however, moving from -ism into mania.

I have loved books for as long as I can remember. Starting with Little Golden Books (my earliest reading), progressing through our family's set of The Book House for Children (which I still have), through the Children's Classics. (I still recall that set fondly, with its great novels such as Black Beauty, Little Women, The Black Arrow, Rose in Bloom, Treasure Island--and I still brood because my mother gave the set away to another family when I was in high school.)

We had little extra money, so it was rare to get books of my own. I was a heavy library user until I first began earning my own money during college. I promptly joined a mail-order book club--Literary Guild, I think it was--and began building a personal library. I didn't have a theme to the library; I just bought books I thought I'd like. It grew and grew.

Within a few years I discovered what has now become a lifelong frustration: never enough bookcases. Because, you see, after I read a book, I keep it; I am a re-reader. If I like a book, chances are that one day I'll go back and reread it. Although I have an excellent memory for associating book titles with their authors, I don't have a good memory for plot details. I'll remember generally what the book was about--e.g., genre, setting, basic story--but not enough to keep me from enjoying the book again when I re-read it.

As time went on, I continued buying books, and my library grew. When I occasionally had to move to a different house, packing and moving the books was the biggest and most back-breaking issue. Still I held on to them, however. Having lots of books made me feel rich, replete, and blessed.

In the early 90s, my love of buying books expanded into mania. I was dealing with various difficulties in my life and buying books became an outlet for me. In 1993 I joined a local chapter of Romance Writers of America, decided I wanted to write romance novels, and began buying and reading them at an unprecedented pace. (I had always enjoyed reading the romance genre, but had never read as much of it as I did after I joined RWA.) Most romance novels were published only in paperback, and a substantial number were in the "category" lines of Harlequin and Silhouette which generally are only on store shelves for a month or so. As a result many of them, even those that were really well-written books, went out of print quickly.

Hence, I realized I had to buy the books when they came out to be sure of having them. And, as I discovered more and more romance writers whose work I liked, I began looking for their backlists, and buying their older books whenever I could. I hit the bookstores whenever I could, obsessively scouring the shelves for books I wanted. For books that were out of print, I went to used bookstores.

I spent money on books the way some women spend money on clothes or shoes or makeup or jewelry. Or the way gamblers spend money at a casino.

And I didn't buy only romance. I bought other types of novels--mysteries here and there, thrillers from time to time, mainstream fiction, and lots of nonfiction, too. I couldn't resist those Sale shelves at Barnes & Nobel, where I found wonderful nonfiction books for such low prices. I figured I needed to build up a good research library for the historical romances I was planning to write. More recently, I've been buying a lot in the Dark Urban Fantasy genre.

Now I own thousands and thousands of books. No, I haven't read them all--I bought a such a pace over the years that I couldn't keep up with the influx. I now have so many books that even if I never buy another book, I probably will never finish reading the ones I already own.

I purchased a program to catalog my library several years ago, which partly automates the process by allowing me to scan in the ISBN bar code on books. The program then downloads information on the book from various websites such as Amazon or the Library of Congress. I have nearly 5,500 entries in the program now, and that's only the books that are actually in my house. I rent a climate-controlled ministorage unit where there are dozens of boxes of other books--I have no idea how many, because I haven't cataloged those yet.

Obsession. Yes, I admit it. But I love my books. I need my books.

Books to the ceiling,
Books to the sky,
My pile of books is a mile high.
How I love them! How I need them!
I'll have a long beard by the time I read them.

As punishment for my sins against physical health throughout my life, the Universe has caned me.

Yes, I've had to start using a cane recently. I twisted my knee a couple of weeks ago and have been suffering with it since then. I limped and teetered around for a couple of days, hoping the pain would disappear, then decided a cane would help me get around. It's a humbling experience in some ways, but I have found a cane is useful for more than just walking.

First, I noticed that my pets were all afraid of it -- apparently dogs and cats instinctively fear sticks. Of course I wouldn't strike any of them with it, but I've found that by holding it in front on me and swishing it around a bit, I can keep them from jumping up on me (which is important now that I'm unsteady on my feet). Subsequently I discovered I can use it to press elevator buttons, or to hold open elevator doors without risking my hand or arm in the process. I can use it to push/pull items on the floor closer to me. I can shake it in the air at naughty children who are riding their bikes on my lawn. And it does help a bit in public places--there are a few people who will hold open doors for me, or offer me other courtesies, as a result of my using the cane.

It's a real ego-killer to occasionally catch sight of myself, reflected in a plate-glass window, stumping along with the cane and lurching from side-to-side. On the other hand, now I really empathize with people who live in constant pain. I understand better how people can become addicted to pain medication. And I feel even greater respect for those who go through life with serious disabilities.

On the lighter side, I discovered when Googling for a picture to accompany this blog entry, there are THOUSANDS of websites that in one way or another focus on walking canes! Who'd-a-thunk-it?