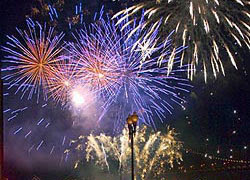 "We will open the book. Its pages are blank. We are going to put words on them ourselves. The book is called Opportunity and its first chapter is New Year's Day." -- Edith Lovejoy Pierce (b. 1904), poet

I thank my friend Shauna Roberts for the quotation, which is perfect to start off the New Year.

I believe in new beginnings, and I like them. I always make New Year's resolutions, although I rarely stick to them for long. I am an optimist. I always try again.

2007 was not a good year for me. I suffered through a variety of worries: extreme anxiety for a beloved family member dealing with addiction, as well as my own health problems, financial worries, caretaking responsibilities, job issues, and free-floating anxiety.

Today marks the end of 2007, however, and tomorrow is a new year. I mentally erase the blackboard of 2007, washing it clean for the new self-history I will write in 2008.

Things for which I was especially thankful in 2007:

I will post my New Year's Resolutions for 2008 tomorrow.

A Few Interesting Links, and Some Greetings

Over at The Outfit: A Collective of Chicago Crime Writers, Kevin Guilfoyle talks about how media coverage of books nowadays tends to focus more on the business of publishing rather than on the products of the publishing houses. As an example, Guilfoyle links to "Anatomy of a Thriller," the Wall Street Journal's recent article on the prepublication promotional machine kicking into high gear for a debut book by a new thriller writer who received a million-dollar advance (28-year-old screenwriter Tom Rob Smith). Cleverly, Guilfoyle titles his blog entry "Don't Know Much about Anatomy."

Pantsing to the Max: The Dickens Challenge

I've posted several times on the Plotter versus Pantser styles of writing. Recently I invited multi-published author Timothy Hallinan to guest on my blog, and he wrote an excellent entry on how a pantser writes a book proposal. I first learned of Tim on reading an excellent article he wrote for The Internet Writing Journal, called To Outline or Not to Outline--a big issue for pantsers, who generally are uncomfortable with extensive advance plotting of their books.

Now Tim Hallinan writes to me with an interesting proposal for courageous pantsers:

If you get a chance, look at my latest blog at http://www.timothyhallinan.com/blog/?p=64.
It issues a challenge to writers to do what Dickens did, and post a chapter at a time AS THEY WRITE THE NOVEL, meaning it's pantsing to the max.

I've said I'll attempt it if two other people are crazy enough to join me.

Is this something you'd like either to attempt or to share with your blog community? I'm sending it to half a dozen writers with sites and also posting it on Crimespace.

What say ye, O bold and faithful pantsers? Shall ye try your hands at this experiment? Can you emulate Charles Dickens, whose chapters were printed week-by-week in the newspaper as he wrote them? 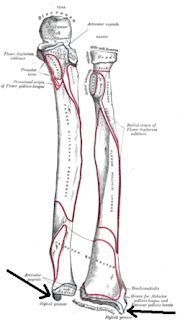 I am sporting a cast on my right forearm. Last week I fell in my house and fractured a small bone in my right wrist (the radial styloid process, if that means anything to you). It's awkward, considering I'm right-handed, but I'm still managing to drive, type and write, albeit with some difficulty. The last time I had a fracture I was eight years old--broke my collarbone jumping over a Hula Hoop. How casts have changed since then! Now they're made of fiberglass (much lighter than plaster) and they come in colors. I chose purple, in honor of LSU (whose football team will be playing for the national college championship on January 7, against Ohio State).

Apropos my November 24 post on Laura Joh Rowland, see Shauna Roberts' For Love of Words blog. Shauna has posted an excellent interview with Laura--insightful questions and thoughtful answers that give good insight into Laura's writing process.

Recently I read the memoirs of both Eric Clapton and Pattie Boyd. I enjoyed both, especially Boyd's, which is better-written. (Boyd shares credit with a co-writer; Clapton doesn't, so perhaps he actually wrote it himself.) I plan to post an in-depth discussion and comparison of the books when I have time. As one who came of age in the Vietnam era--I graduated high school in 1968--the Beatles, the Rolling Stones, and the whole "British invasion" of popular British music and culture are an integral part of my memories. The rumors about Clapton (I still remember the "Clapton is God" graffiti) and Boyd (muse and wife to two of the greatest rock musicians of all time) were both romantic and titillating. More to come in my (future) post on the subjects.

Currently I'm reading Empire of Ivory, fourth in Naomi Novik's Temeraire series, which I highly recommend. They are alternate-history fantasy novels that recount the adventures of a British military officer during the Napoleonic wars, but with a big twist: in this version of history, there are dragons, which humans use to help them in battle and otherwise. The dragons are highly intelligent and can speak human languages. The Temeraire website describes them as, "A reimagining of the epic events of the Napoleonic Wars with an air force—an air force of dragons, manned by crews of aviators." The books are fascinating and well-written, with lots of action, battle scenes, and surprises. They can be read for pleasure only, or for those who like more substance in their stories, they can be read for the deeper social questions they pose. Peter Jackson, who directed the Lord of the Rings movies, has optioned the Temeraire series for film.

Next in line in my TBR pile is Richard Matheson's My Name is Legend. Matheson is a prolific scifi/horror writer, dozens of whose stories and books have been made into movies and TV shows. I remember seeing the title I Am Legend around for years, but the advent of the upcoming movie starring Will Smith piqued my interest enough that I decided to read the book before I see the movie. I'll let you know what I think about the book versus the movie after I've read the one and seen the other.
Posted by Sphinx Ink at 12/09/2007 03:49:00 PM 3 comments: