I came across some good items today to share with you:

At The Outfit: a Collective of Chicago Crime Writers, Kevin Guilfoyle's Don't Touch Me, I'm a Real Live Wire, is chilling--not least because it reports real conversations by a real killer.

C.S. Harris has a thoughtful post today on "Heroes, Villains, and Cognitive Dissonance."

Charles Gramlich of Razored Zen has an interesting discussion of fast-versus-slow suspense in "Suspense Work."

The Oprah/James Frey controversy continues: "Publisher blasts Oprah over James Frey Controversy." I wonder what Oprah's reaction will be...for sure, none of Nan Talese's authors will ever again be selected for Oprah's Book Club.

Finally, the Washington Post reports that the new film Becoming Jane Austen is pushing the buttons of those Janeites who insist on historical accuracy: "Pride and Provocation: A New Film Imagines Jane Austen in Love."
Posted by Sphinx Ink at 7/30/2007 06:18:00 PM 2 comments:

Over at Walk on the Weird Side, Kate S has posted a hilarious possibility for an epilogue to the Potter story. Kudos to Kate and to her brother, who sent it to her. And the accompanying photo--naughty, naughty! (Of course, I have wondered whether Hermione would eventually get it on with either Harry or Ron....Apparently I didn't give my imagination enough scope.)
Posted by Sphinx Ink at 7/21/2007 09:31:00 AM 3 comments:

Over at the Booksquare blog, Kassia Krozser is touting the virtues of BookTour.com. Sounds like something my published-author friends would find useful. See Book Tours: Finally, Someone Makes It Easy For Everyone. And doesn't she have the coolest logo graphic ever?
Posted by Sphinx Ink at 7/19/2007 02:51:00 PM 1 comment:

I'm seeing more and more collaborative novels on bookshelves nowadays--or perhaps I'm just noticing them more. Two members of my weekly writers' group are collaborating on a new espionage thriller series. Writing as Steven Graham, my buddies Candice Proctor (better known in the blogworld as C.S. Harris) and Steve Harris have their first book together, THE ARCHANGEL PROJECT, coming out in the spring of 2008, with the second one in the works. They've discussed their process a bit at some of our meetings. From what I recall, Steve, who spent years in military intelligence working on classified material, provides the background and research information. He and Candice work out the plot together, with Steve's knowledge of the world of espi0nage the critical factor. They work together on character development and dialogue. Candice writes the prose, while Steve reads and edits her drafts.

(They are married to each other, which I assume makes it easy to find time to work together on the books.)

Other collaborations being published are those between high-profile authors, such as James Patterson and Tom Clancy, with unknown or little-known co-authors. My impression of their arrangements is that the famous author suggests the basic plot, or even the full-blown plot, while the co-author does the actual research and writing. Most important is that the famous author lends his name, which guarantees book sales.

Other writing teams whose books are popular include Tori Carrington a.k.a Lori and Tony Karayianni; C.T. Adams and Cathy Clamp; Judith Michael a.k.a. Judith Barnard and Michael Fain; Ellery Queen a.k.a. Frederic Dannay and Manfred Bennington Lee ; Emma Lathen a.k.a Mary Jane Latsis and Martha Hennissart. There are so many others I won't attempt to list more. In Googling the topic, I came across whole books written about writing collaborations.

Of course, the script of almost every movie is a collaborative effort--it's unusual to find only one name in the credits.

Collaboration is more common in nonfiction work than in fiction, however. (When you're working with facts, facts, facts, it must be easier to divide up writing/research/development duties than dividing up a novel.)

Bob Mayer has a good post on collaborative writing at the Crusie-Mayer Writing Workshop--HE WROTE: Collaborating (aka Bob is always right). His writing collaboration with Jennifer Crusie has resulted in two books so far (the second to be released in August). Theirs is a full collaboration on the entire manuscript, in the sense that each writes approximately half of it. Bob writes the male characters and male P.O.V. scenes, while Jenny does the female characters and female P.O.V. scenes. Bob's post discusses other types of collaborations, too, and makes points about what you have to do to work successfully with a writing collaborator.

I can't really picture ever collaborating with another writer on a book, because I'm pretty much a lone-wolf kind of writer. Who knows, however--it could happen.
Posted by Sphinx Ink at 7/17/2007 01:04:00 PM 2 comments:

On Thursday, July 12, Octavia Books in New Orleans will hold its (sort-of-annual ) George Alec Effinger memorial reading. George Alec Effinger was a noted science fiction writer who lived in New Orleans during most of his last three decades. He died here in April 2002. Effinger's first novel, What Entropy Means to Me (1972), was nominated for the Nebula Award. Schrodinger's Kitten, a novelette, won both the Nebula and the Hugo awards. Although science fiction was his genre, many of his stories also included elements of fantasy and horror. His stories have a sly sense of humor and antic wit.

I'd heard of Effinger over the years numerous times, and had read some of his work during my SF-loving days in my twenties. I didn't know he lived in my town, however, until the early nineties when I joined SOLA, the local chapter of RWA. There I met Laura Joh Rowland, author of the Sano Ichiro historical mysteries set in 16th-century Japan. Laura credits her publishing success to her membership in an ongoing writers' workshop started by George Effinger in the late eighties. Effinger served as mentor to the group almost to the end of his life, until he became too ill to continue. (Laura, with twelve published novels to her credit, has now taken the post of mentor in the group, which continues to meet monthly.) As I grew to know Laura over the years, I heard more about Effinger; he even spoke at SOLA meetings a time or two. Over the years Laura often mentioned Effinger's generosity to and encouragement of aspiring writers.

After Effinger died in 2002 a group of his friends and his former wife, prolific author Barbara Hambly, decided to hold a reading of his work as a memorial to him. A local bookstore, Octavia Books, offered its premises as a place for the reading, and the first George Alec Effinger Memorial Reading took place. Amid chuckles, snorts of laughter, and a few tears, George's nearest and dearest read excerpts of his work. Readers included Barbara Hambly, Laura Joh Rowland, and Andrew Fox (also a member of the Effinger workshop; like Laura, Andrew credits his becoming published to Effinger's encouragement and support).

Sadly, at the time George died most of his work was out of print. In the years since, however, several of his novels and collections of his stories have been reprinted, due at least in part to Barbara Hambly's efforts. Octavia Books has continued to host Effinger memorial readings, held sporadically in conjunction with releases of Effinger's reprinted works. It's always an evening of fun, fellowship, nostalgia, wit, and good humor. This year Andy Fox (see above) is the featured reader. Barbara Hambly won't be there this year, but Laura Rowland will. And so will I, and other Effinger-ites.

If you're going to be in the New Orleans area around 6 p.m. this Thursday, July 12, why not drop by Octavia Books, 513 Octavia Street (corner of Laurel) in New Orleans' Garden District? Come pass a good time and join us in celebrating the genius of George Effinger.
Posted by Sphinx Ink at 7/09/2007 07:17:00 PM 4 comments: 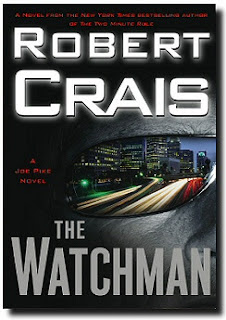 Two years ago I'd heard of Robert Crais, in the sense of seeing his books on shelves in bookstores, but his name didn't mean much to me. I'd even bought and read one of his non-series books, Demolition Angel, which wasn't a waste of time, but didn't drive me to seek out the rest of Crais' oeuvre.

A couple of summers ago, however, I discovered Crais' Elvis Cole mystery series. I'd seen Crais and the series praised in reviews and on websites. When a book I want to read is part of a series, I try to acquire the earlier books in the series so I can start at the beginning. That's what I did with Elvis Cole. From the first page of The Monkey's Raincoat (1987)--the first Elvis Cole book--I relished everything about the character and the writing. I knew I'd be following this series and this writer from then on.

I quickly sought out every other book in the series and tore through them hungrily. I loved the character of Elvis Cole from the first page of the first book. He's a former Army Ranger turned wisecracking private investigator, who wears a Mickey Mouse watch, does yoga to keep in shape, and calls himself the World's Greatest Detective. His jokes are corny but funny; his easygoing humor hides a mordant intelligence and keen observational skills. He's relentless and tough, deadly when he has to be, but has a tender heart. What makes the series great is how Crais develops the character of Elvis Cole more with each book in the series. Now, like every other anxious fan, I wait for the annual installments.

Notably, in case you're a fan of Michael Connelly's Harry Bosch series,

Through the Cole series Crais has developed a secondary character so well that the character now has his own series--just started with Crais' most recent book, The Watchman, subtitled "A Joe Pike Novel" (2007).

Joe Pike is Elvis Cole's partner, mysterious, a former Marine war hero, machine-like and powerful in his focus on the job at hand, both fascinating and frightening to everyone he meets. Just as Crais developed Elvis Cole throughout the series, he also developed Joe Pike's character (although at a slower, less-revelatory pace). Pike had a starring role in L.A. Requiem (1999), which not only was a powerful novel, but also revealed Pike's past so that we understand why he is the way he is. We know what drives Joe Pike; unlike Cole, he's not easy to like, but he's powerful, riveting and charismatic. Many critics called L.A. Requiem Crais' best work to that date, and the novel marked a distinct change in Crais' writing style.

Crais also has written three non-series novels: Demolition Angel (2000), Hostage (2001), and The Two-Minute Rule (2006). I mentioned Demolition Angel earlier in this post; it's a dark book, well-done for its kind, but with a damaged, bitter heroine with whom I could not identify. Hostage has a lot of action (well, all Crais' novels have a lot of action) and was made into a pretty-good movie starring Bruce Willis. The Two-Minute Rule features an ex-con bank robber out to avenge the death of his only son; I understand Crais may be writing a second novel featuring that character, Max Holman.

I enjoy seeing the progress of a writer's development, which is why I always try to read an author's books in the order in which they were published. I find Crais' writing addictive. I can see his development as a writer from the earlier books through the latest. The earlier Cole books were well-done, but lighter, with a few bones of their storytelling skeletons poking through. The later books are richer, more complex, and with much broader scope.