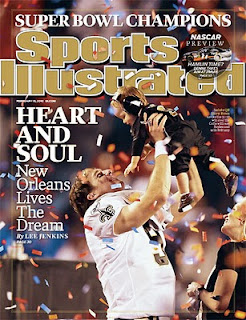 Yeee-haaaahhhhh! That's my cheer for the Saints winning the Super Bowl. I'm a few weeks slow getting this post online, but that works out well. I've had a chance to observe not just the night of the Super Bowl victory, but the days and weeks afterward.

Wow. We're still elated, floating on air, exuberant, overjoyed, delirious with happiness. It's been a huge boost  for everyone, not just the sports fans. It gave us our power back, power that seeped away over many long years of defeat after defeat--failures not just of the Saints, but of the city, the area, the whole state. Katrina was nearly a death-blow. We're fighters, though; we've hung in there, remained loyal to the Saints, kept hope alive despite our civic messes, doggedly rebuilt from disaster after disaster.

Now, well . . . who ever thought we'd see headlines like "Aggressive tactics boost mighty Saints to first title" (USA Today) "Mighty Saints"! There was a time when those words would have been said only in cruel derision.