In memory of my mother's cousin, Private First Class Alcide G. Angelloz Jr., killed fighting in France in 1944, I post a famous and touching poem:

In Flanders Fields the poppies blow
Between the crosses row on row,
That mark our place; and in the sky
The larks, still bravely singing, fly
Scarce heard amid the guns below.

We are the Dead. Short days ago
We lived, felt dawn, saw sunset glow,
Loved and were loved, and now we lie
In Flanders fields.

Take up our quarrel with the foe:
To you from failing hands we throw
The torch; be yours to hold it high.
If ye break faith with us who die
We shall not sleep, though poppies grow
In Flanders fields. 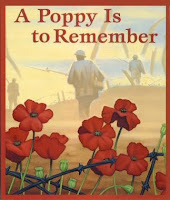 Memorial Day was first observed on May 30, 1868, when flowers were placed on the graves of Union and Confederate soldiers at Arlington National Cemetery. After World War I it became a day to remember not just those who died fighting in the Civil War, but also Americans who died fighting in any war. Inspired by the poem "In Flanders Fields," it became the custom to wear artificial red poppies on Memorial Day.
In December 2000, Congress established a program to observe a universal "National Moment of Remembrance" on each Memorial Day as a "simple and unifying way to commemorate our history and honor the struggle to protect our freedoms." The "National Moment of Remembrance" asks that at 3 p.m. local time, all Americans "voluntarily and informally observe in their own way a Moment of remembrance and respect, pausing from whatever they are doing for a moment of silence or listening to 'Taps.'"
The U.S. Memorial Day website suggests these ways to observe the day:

"Memorial Day is not about division. It is about reconciliation; it is about coming together to honor those who gave their all." -- Memorial Day History.
Sources:
http://www.arlingtoncemetery.net/flanders.htm
http://www.usmemorialday.org/index.htm
http://www.magpieandmuttonfly.com/2008/05/in-other-words-memorial-day-2/
Posted by Sphinx Ink at 5/31/2010 06:00:00 AM

Great poem indeed. And yes, it's good to remember, on this and every day.

That poem always reminds me of Canada, where it's often recited on Remembrance Day & people donate money to the Royal Canadian Legion in exchange for little poppy pins.

That was one of my favorite poems as a kid. So haunting.