The Oil Spill and the Chain of Life

It's Prophet-of-Doom time again. If you're not in the mood to be bummed out, then skip this post.

A few days ago Newsweek published "What the Spill Will Kill," which discusses not only the damage the BP Oil Spill will have on the surface environment, but also what may happen in the deep sea:

The consequences for the delicate balance of existence in the vulnerable ecosystems of the gulf, and for the vast cycles of nature that sustain life there and beyond, are as incalculable as they are potentially devastating. ... 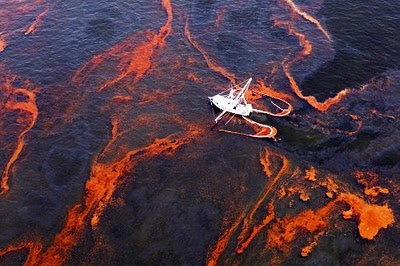 As far as scientists can tell, the undersea oil is actually a witch's brew of crude mixed with dissolved methane, stretching 15 miles long, 5 miles wide, and 300 feet thick in the case of one plume detected by the Pelican, and 22 miles long, 6 miles wide, and 3,000 feet thick in the case of a plume found by University of South Florida researchers aboard the WeatherBird II last week. The latter plume reaches all the way to the surface. ...
These undersea rivers of oil, though not nearly as concentrated as oil at the surface, are likely to affect the gulf through two mechanisms. The first is oxygen depletion, which has been estimated at 30 percent in the plumes. The other will be direct toxic effects of the oil and methane. Leatherback turtles and sperm whales dive to the 3,200-foot depths where plumes have now been detected, and aren't smart enough to take evasive action. ... Sharks, shrimp, and squid are all inhabitants of the deep, which would protect them from a Valdez-type spill on the surface, but now puts them in the crosshairs. Marlin, snapper, and grouper swim hundreds of feet down. One of the biggest losses may be bluefin tuna. Already imperiled from overfishing, the species breeds only in the Mediterranean Sea and the gulf. ... Even small bits of crude, like those in the plumes, can suffocate fish by gunking up their gills.

Other species imperiled by the deep-sea plumes include those that migrate down from the surface and others that make the reverse commute. "There are plankton that go from the surface to the middle of the water column, and other things eat them and go down deeper, and other things eat them and go to the bottom," says oceanographer Lisa Levin of Scripps Institution of Oceanography. "All the zones of life interact, and now they're probably all being hammered."

The worst effect of large-scale death on the gulf floor is nothing as photogenic as dead pelicans, but much more pernicious. "The organisms most likely to be harmed by the oil plumes are those at the base of the food chain," says biological oceanographer Andrew Juhl of Lamont-Doherty. "Most of the primary producers, such as phytoplankton, live throughout the water column. Effects on them would cascade to the larger species we care about."

The deep-sea communities are also linchpins of the global carbon cycle—the ocean's garbage men and recycling centers. They eat the waste and carcasses of creatures that lived and died in higher layers of the sea, and whose bodies drift to the sea floor. ... [W]ithout deep-sea organisms, dead marine creatures would accumulate like bottles and cans in places without deposit laws. That would deprive the rest of the living seas of the nutrients they need to keep life going. If a large enough area in the depths of the gulf becomes a kill zone, organic matter would accumulate in the sediment and be cut off from the rest of the ecosystem, says marine scientist Mahlon Kennicutt of Texas A&M.

Uniquely in the crosshairs are creatures living at or near the sea floor: deep-sea corals, jellyfish, and soft-bottom fish such as Atlantic croaker, sand seatrout, Atlantic bumper, sea robin, and sand perch. Three coral reefs live in the area under the surface slick, and two are close to one plume that scientists tracked last week. Oil could be lethal to a reef. The Minerals Management Service's 2007 report concluded that "in the extremely unlikely event that oil from a subsurface spill were to reach a coral reef…in lethal concentrations," recovery could take as long as "10-20 years." "In the time scale of man, this will be a catastrophic event," says Baguley.

Of special concern are the hundreds of "seep" communities in the gulf, enclaves of crustaceans, weird tube worms, tiny fish, mussels, and crabs that live near natural gashes in the sea floor. These seeps release hydrocarbons, which might suggest that the oil-and-methane plumes are good for these creatures. Unfortunately, the profusion of hydrocarbons is likely to be less like sitting down to a Thanksgiving feast than like being encased in marshmallowed sweet potatoes: deadly. Like Yellowstone's geysers, they support unique organisms that may have scientific and commercial uses. Bacteria from a Yellowstone geyser are the source of enzymes that power a biochemical reaction called PCR, a workhorse of the genome revolution. Marine scientists have high hopes for finding similarly valuable microbes at the seeps. Some even talk of compounds that might fight cancer, much as extracts of the rosy periwinkle fight Hodgkin's disease and childhood leukemias.

Oil on the ocean surface eventually evaporates, is degraded by sunlight, gets consumed by microbes, or washes up on beaches, where it can be collected. The fate and effects of the undersea oil are largely unknown. The Deepwater Horizon disaster is thus one big unplanned experiment.

As I said in my previous post, Krewe of Dead Pelicans, the effects of the BP Oil Spill will be felt not just for decades but possibly for centuries. It could change the ecological balance of the entire planet.
Posted by Sphinx Ink at 6/09/2010 12:07:00 PM

I ws reading a bit about Hemingway monday and how much he loved fishing in the Gulf Stream, and I was thinking this oil spill would have killed him if he wasn't already dead.