This is hilarious--like something from a Saturday Night Live skit: 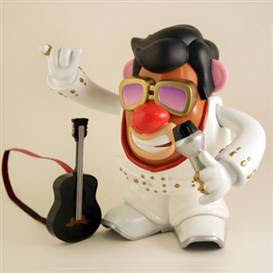 The Elvis version of Mr. Potato Head will be released for Elvis Tribute Week, according to a Graceland spokesman.
Photo by PPW Toys
Mr. Potato Head Elvis Presley Figures to Launch in August of 2010
From http://www.elvis.com/news/full_story.asp?id=2297 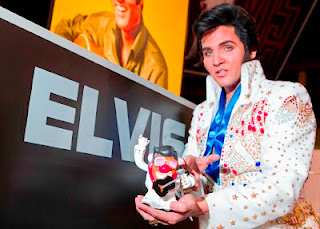 Hasbro licensee PPW Toys suits up MR. POTATO HEAD as Elvis Presley for a unique co-branded product. An Elvis tribute artist shows off the new collectible during a launch event at Licensing International Expo 2010 in Las Vegas.
Posted by Sphinx Ink at 6/10/2010 01:48:00 PM

Years ago I bought some Star Wars potato heads for my nephews (including Darth Tater--I kid you not.) Where were such toys when WE were kids???

CHARLES, it's weird but funny, eh?

LANA, I agree--why did they not have "theme" Mr. Potato Heads when I was a kid?

Of course, when I was a kid, we played Mr. Potato Head with real potatoes. The toy kit consisted of the eyes, mouths, and other accessories -- surely fewer than come in the package nowadays -- and kids were expected to use potatoes from their home kitchens. (Perhaps more creative kids also used oranges, apples, etc., but I was never that inventive.) Mothers everywhere must have been happy when Hasbro started putting plastic potato bodies in the toy kits. No more messy kitchen raids! No more finding rotten potatoes with bulging eyes and handlebar mustaches under your kid's bed!