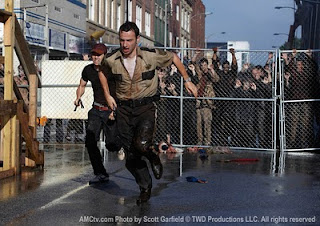 The Walking Dead is a new series on cable channel AMC (American Movie Classics). It's a six-episode miniseries about a zombie apocalypse, where the live people are trying to figure out how to survive. (There seem to be far more Living Dead than Living Living.) It's really well done, with excellent production values and good actors, good writing, classy ambiance (okay, "classy ambiance" & "zombie movie" sound like a contradiction in terms, but it's classy for a zombie movie). The Associated Press critic loved it. I recommend it, unless you just can't stomach the peeling flesh, partially-rotted corpses, etc., that are the stock-in-trade of zombie movies. The AP article on the show has interesting comments from a couple of the network execs:

One big surprise for viewers who thought they knew the zombie-film genre: an across-the-board humanity resonating in the "Walking Dead" saga.


"There are sequences where zombies are actually humanized," notes Joel Stillerman, AMC's head of original programming. "The series has an empathetic point of view that isn't just about the survivors but about the zombies, too.

"Transcending gore for gore's sake was very important to us," he says.

Adds AMC president Charlie Collier, "It's a character drama about survival, where the characters are faced with decisions of 'What would you do, given this adversity? Who would you be? Would you stay or go? Lead or follow?' These are universal themes."

I've been enjoying it. I did see that a few zombies seem to be destined for something a bit more than the average brain hunt.

I'm not one for zombies, myself, but I'm glad Charles has found something on TV he's enjoying.

Interesting. Not a fan of zombie movies so I think I'll pass, despite two of my friends' enthusiastic endorsements. Lana's comment gave me a little chuckle!