Running of the Bulls in New Orleans!

It's that time of year again--the Running of the Bulls in New Orleans!

This is the announcement from the Times-Picayune: 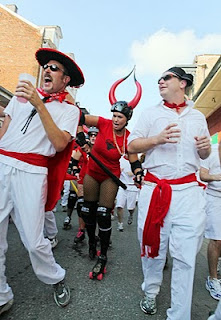 The Running of the Bulls

San Fermin in Nueva Orleans replicates and pays homage to the world famous Encierro of Pamplona, Spain, or "The Running of the Bulls", only the bulls are none other than members of the Big Easy Rollergirls. The event will begin at 7 a.m. at the Three Legged Dog bar the French Quarter. Sangria, Stella Artois beer, Spanish wines and good cheer will be available. The "running," which winds through the streets of the Quarter, begins sharply at 8 a.m.

This event has grown exponentially each year since it started. Now, in only its fourth year, it's expanded to a three-day festival. It starts on Friday night with a pre-party (El Txupinazo) featuring tapas, paella, flamenco dancing, and lotsa beverages. On Saturday morning is the main event--the running of the bulls (El Encierro)--followed by rest time, then a post-run party Saturday night (La Fiesta de Pantalones) that includes a concert, more great tapas, and lotsa more beverages. (Me, I love a good Sangria.) On Sunday there is a grand finale (Pobre de Mí), about which I quote from the Nolabulls website:

WHAT: As part of the grand finale to the San Fermin in Nueva Orleans fiesta weekend, the festivities continue with the second annual Pobre de Mí (Poor Me). Featuring a savory tapas brunch menu by Vega Tapas Café and specialty drinks, the event is highlighted by the 2nd Annual Ernest Hemingway Talent Contest, a collaboration with NOLAFugees:

Six teams enter the ring, but only one will claim the big prize. Sign up now with your 2 or 3-person team (or just sign up now and draft someone on game day) to compete in this Ernest Hemingway-themed contest of nerves. Teams will perform 2-minute micro-skits (no memorization required,as there will be closely-guarded scripts provided at the event) of infamous Hemingway scenes. A panel of judges, and the audience, will decide who advances to sweet sweet victory.

What you need to participate: absolutely nothing. A sense of humor helps, but is not required.

What you do not need: any prior knowledge of Hemingway’s works or life.

What you will gain by joining the hunt: Prizes. Glory. And your photo will be made over the carcasses of your enemies.

What you stand to lose by not joining the hunt: your sense of adventure, and perhaps the ability to look your mother in the eye when she says, “Don’t worry, honey, I love you anyway.”

So unleash your inner Hemingway and enter now!

We will also roll the party directly into a live screening on multiple screens of the 2010 FIFA World Cup Final Match in South Africa!

I love the whole idea of this--it's so New Orleans and, yes, so Spanish. (Not to mention that The Rolling Elvi will be following the crowd of bull-runners....) 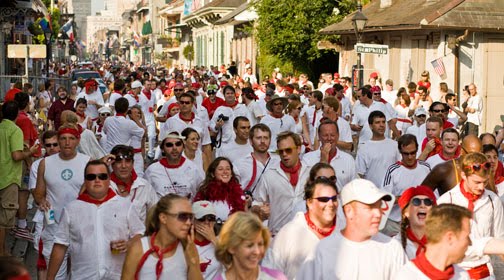 Why don't they do these things in April? It's too darned hot these days!

I sure miss New Orleans!

Ohyeah... New Orleans knows how to do this stuff right!

One of these days I need to get down there to see this.