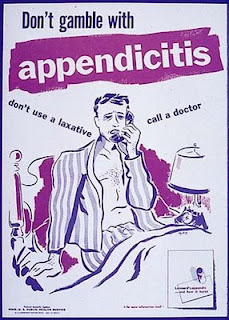 I've been pretty healthy person most of my life, with just a glitch here and there. Much to my surprise, I now speak to you as survivor of an emergency appendectomy. Yes, that scary situation, where you rush to the ER in excruciating pain, hoping against hope they won't have to cut on you, hoping it's only gas pains...only to discover that yep, the pain in the right lower quadrant of your abdomen, which has grown increasingly worse over the last 12 hours, is indeed an inflamed and already perforating appendix.

Fortunately, nowadays there is surgery by laparascope, in which you get only two or three little incisions instead of a big one; the surgeon goes in by remote control, snips away the offending vermiform remnant, suctions out the nasty pus and fluid, glues rather than sews closed any openings that shouldn't be there, then neatly withdraws and seals the tiny incisions with butterfly bandages. Tah-dah! Except for a few hours of agonizing gas pains on the day after surgery, recovery is amazingly fast and you're ready to go back to work within a couple of weeks.

Whew! I'd like to leave it all behind as among my less-favorite memories...but alas, during the presurgery testing, they discovered a problem with one of my kidneys, so I'll have to undergo another surgery in a few weeks. Sigh.

I am comforted to realize that if I'd been born fifty years earlier, I probably would have died of the appendicitis. I'm profoundly grateful to live in the world of modern medicine, with CT scans, laparoscopies, and -- last but hardly least -- really effective pain medication. Heh heh heh.
Posted by Sphinx Ink at 3/27/2009 12:55:00 AM

Glad to hear that you were able to come through it so quickly. Hopefully the next surgery will be as low-impact as possible. Take care of yourself!

Glad to hear that you're ok! I'm sorry to hear you've got another surgery pending and am sending positive wishes your way for another good outcome.

I had my appendix out almost 40 years ago and back then it involved a week long hospital stay! Things have improved.

Glad you're okay, Sphinx! Hope the kidney thing turn out to be not much at all and the pain meds are plentiful and top-notch!

Welcome to the club, unfortunately. *L* I had mine at age 15 or so, I have the big, ugly scar & had a very bad time of it. Spent weeks in the hospital & was confined to a wheelchair after that. I went from 115lbs to 86 (but at the time, I thought I "looked good.")

This must have been so scary. Glad to hear all turned out well, and hope the other matter will resolve as easily.

My grandmother had an eight-year-old brother who died from a ruptured appendix many, many years ago, so you're right: thank god for modern medicine. It's at times like this they're really useful (other times, less so!).

Sorry to hear about your surgeries, but glad that you came through the first in good shape. Would your kidney problem have been apparent without the appendectomy? If not, perhaps the appendicitis was a good thing.

So glad you weren't born 50 years sooner!! I had a similar experience with my gallbladder. Glad you are now safe and sound again.